One Horsepower – a long slow walk in the greenwood

eBook.  (ePub Format) File Size approx.50 Mb.
A PDF file (6 Mb) is available on request for all customers who purchase the eBook.

Please scroll down for details and synopsis.

Payment by Paypal or BACS.

One Horsepower:
horse logging in the Lake District.      (eBook version)

A  long slow walk in the greenwood – a technical, autobiographical, philosophical, political memoir.

This eBook is an ePub file, and can be read by Kindle, iPad and Microsoft.
Various free eBook readers are available, including Calibre and Sumatra.
One horsepower has been optimised for Calibre.

Bill Lloyd traces the roots of his environmental awareness back to the writing of the 1950s Beat Generation, via the hippy counterculture of the 1960s, to the first tremors of anxiety about climate change which rippled through ‘alternative society’ in the 1970s. Motivated by his admiration for the manual skills of Victorian rural craftsmen, the writings of Henry Thoreau and warnings from the heart of the UK economy, he and his partner Alison made a personal stand against consumerism and mechanisation by a re-evaluation of horsepower. Living hand-to-mouth in a caravan, moving from wood to wood, they specialised in demanding logging contracts using nothing but heavy draught horses, in difficult terrain inaccessible to fossil-fuel powered machines.

Theirs was not a nostalgic or sentimental journey, but a practical attempt to redeem the working horse from the backwaters of history. This book describes the techniques, the people and places, the accidents and agonies, the grime and the glories of woodland contracting, sustained not by materialism but by a pioneering spirit, the magnificent Lake District landscapes and the intense revelations of working in close harmony with natural forces in the natural world.

22 chapters plus glossary, bibliography, and index.
300 pages, with over 100 illustrations and photographs.

In 1976, the United Kingdom was in crisis on all fronts. The great heat wave caused the worst drought for 300 years and the Sterling crisis required the largest bail-out in the history of the IMF. The global energy crisis was unresolved and the IRA was trying to blow the heart out of London. The highest minds in the land feared catastrophe and socially divisive cuts in public expenditure followed. For many environmentally-aware idealists, a new world order was essential, and soon.

Bill Lloyd was one such idealist among many thousands of others, for whom the priority was action and not words – positive, non-violent direct action. Alternative technology, organic farming, free festivals, whole- foods, and a rejection of consumerism offered a practical route by which they could try to make a difference. Bill had trained for the theatre and worked as an actor, musician and stage-manager before becoming Director of a residential centre for Creative Writers, but the real threat of impending economic and environmental collapse soon became an all-consuming priority.

This is the story of his transition from the carpeted corridors of arts administration to the wide open spaces, the damp woodlands, the traditional techniques and the hard knocks of life as a full-time forestry horseman in The Lake District.

Part detailed technical manual, part autobiography, part environmentalist’s manifesto, part spiritual quest and part guide to the unique geography and culture of the English Lake District, this book gives a first-hand insight into some of the over-riding issues of those days, issues which remain as challenging and urgent in 2020 as they were in the 1970s.

With over 100 photographs and illustrations 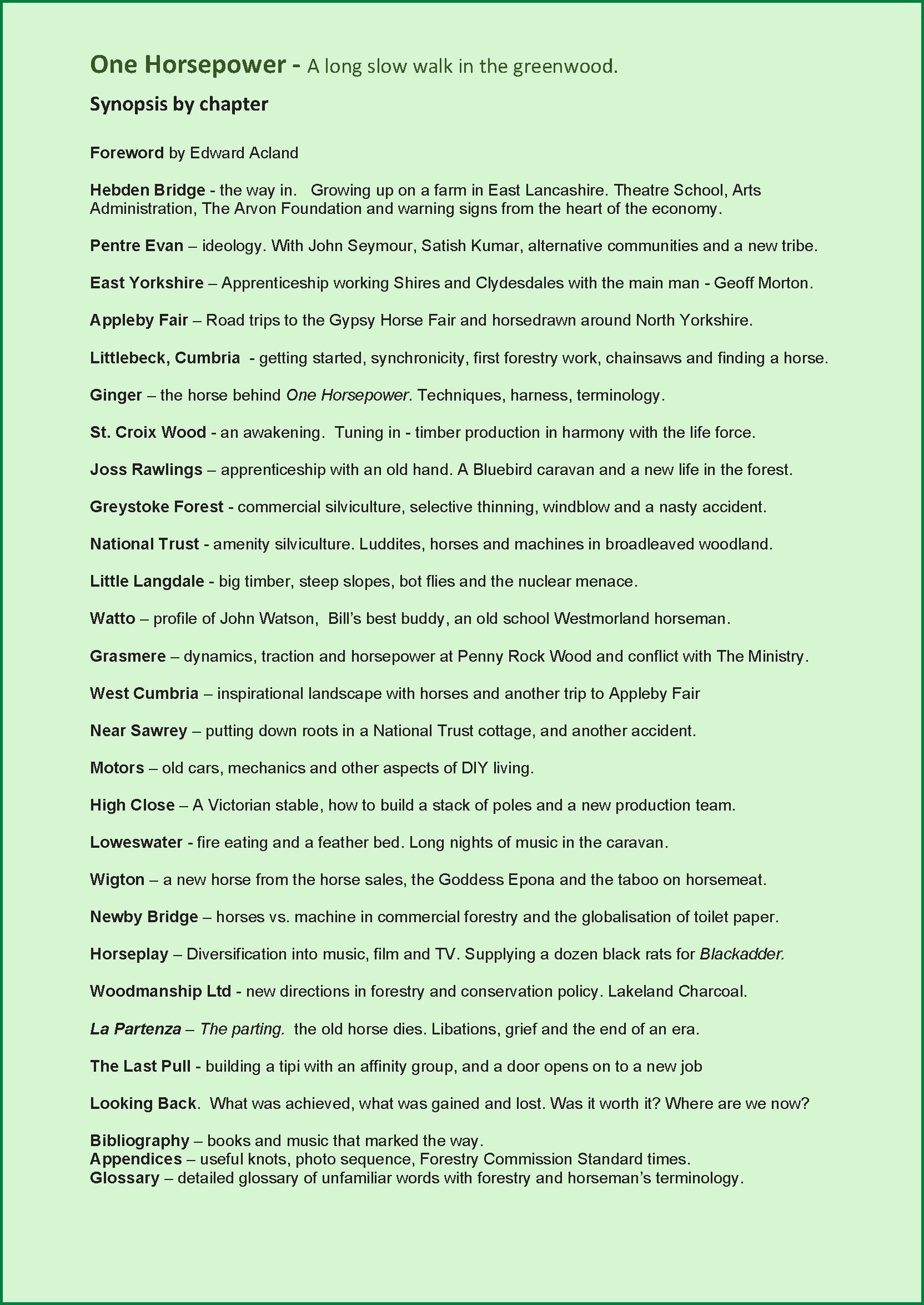 Bill Lloyd trained for the theatre at Birmingham University, and after working as an actor, musician, stage manager and arts administrator, he spent seven years as a forestry horseman. He was a founder of The New Woodmanship Trust and Lakeland Charcoal.

In 1984 he was appointed Music Officer at the Brewery Arts Centre, Kendal, and for three years was Director of the Kendal Folk and Jazz Festivals. He then graduated with an M.Sc. in Business Analysis and Information Management from Lancaster University and established Lloyd Music Ltd, to produce, distribute and publish orchestral and folk music recordings. He continues to operate  that business with his wife Alison, and together they manage Higher Level Environmental Stewardship schemes on sensitive wildlife habitats in Cumbria.

One Horsepower is Volume I of his autobiographical memoir. He is currently working on Volume II – The Whispered Waltz – episodes from 40 years working as a travelling folk musician and storyteller (banjos, ballads and bagpipes) at clubs, campfires and festivals in England, Ireland and Scotland.

There are no reviews yet.

Be the first to review “One Horsepower – eBook” Cancel reply

Please navigate to Appearance → Widgets in your WordPress dashboard and add some widgets into the Sidebar widget area.